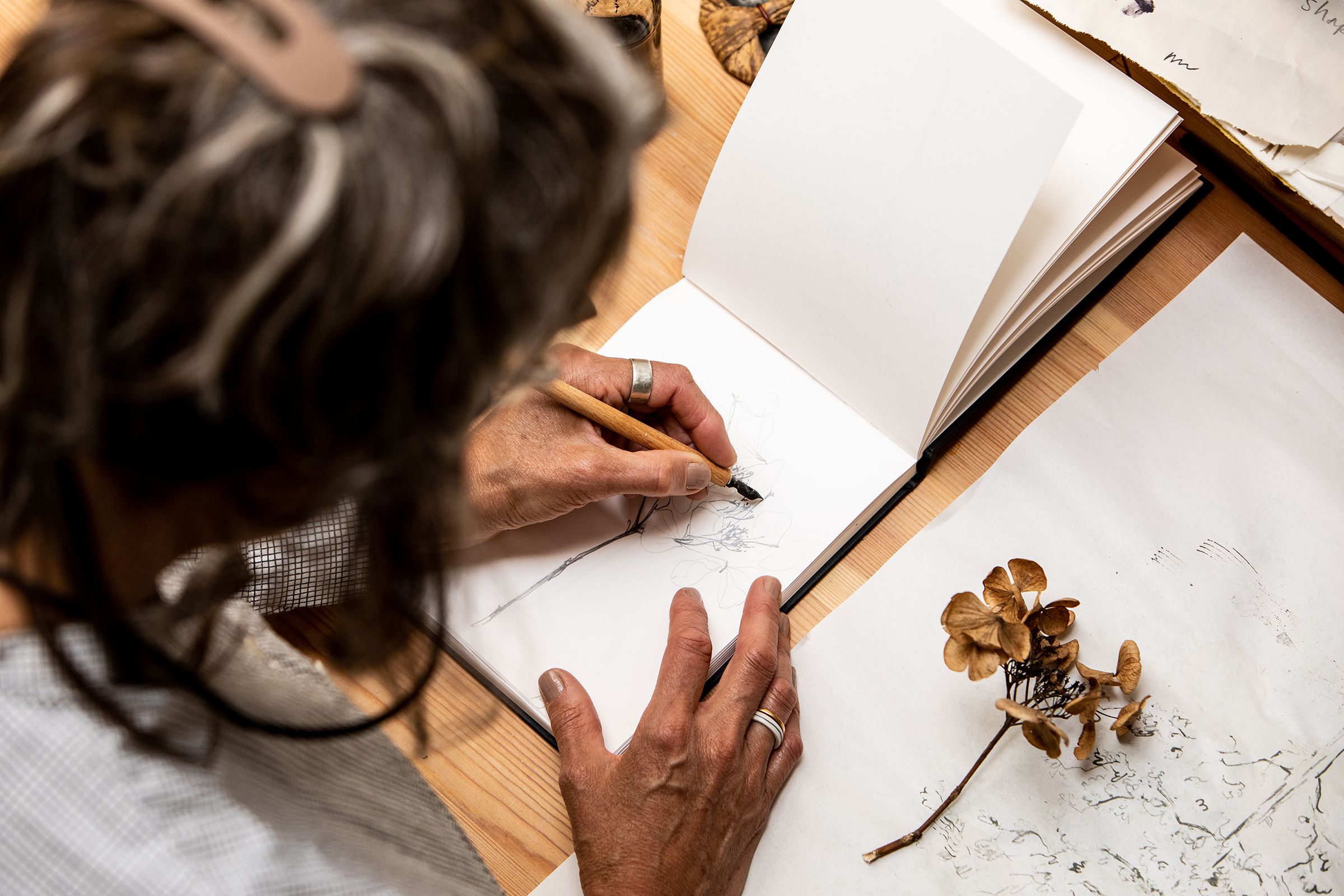 Mary Claire Smith’s practice is rooted in a sense of place achieved through drawing—using repeat sketches of a subject made outdoors through considered observations of a landscape. She responds to the atmospheres and feelings conjured up by her surroundings—remaining mindful that we are all in and of nature—and she spends time contemplating the shapes and movement of trees and other natural forms.

In a recent series Mary Claire examines the tension between human and natural worlds by raising questions as to whether a building might be being reclaimed or overtaken by natural forces—a re-wilding— or whether it might be inserted as an interference or disturbance to nature. Or maybe that of a world in which humans and nature respectfully co-exist.

Mary Claire is currently working on a series of tree portraits that have become increasingly central to her practice. They focus on the undulations of branches, the textures of bark and the choreography of leaves. She is hoping to show both the solid rootedness of these beautiful forms, as well as their flowing, fragile and ethereal qualities, in order to depict something of the life force of these majestic structures. She is inspired by the immediate surroundings of the North Kent coastline, as well as by her travels in other coastal terrains.

Science has shown how important trees are in combatting the ravages of the climate emergency by absorbing and storing carbon. There has also been research into the ways in which trees are able to communicate, sharing the resources of the forest—light, soil and water—to ensure the survival of the eco-system. Trees, then, both bear witness to and actively affect how human beings (mis)treat the natural world. Mary Claire utilises the tree motif as a poignant symbol of the crises of climate and biodiversity.

Mary Claire’s current project celebrates the powerful history of one particular tree—Kett’s Oak in Norfolk. The tree is in the location where, in 1549, Robert Kett and his brother William met with a group of men in what was to become known as Kett’s Rebellion, making a stand against the enclosing of the common lands and the rising cost of living. Tragically the rebellion failed, and several rebels, including Robert and his brother, were hanged at Kett’s Oak. The project draws on the relevance of these themes to current concerns around the environment, loss of common land, and the right to protest.

Mary Claire Smith has a degree in Fine Art, and postgraduate qualifications in Printmaking and Illustration from Central Saint Martins, where she was awarded the Cecil Collins Prize for Print. She has worked as a freelance illustrator, studio assistant at Paupers Press and Hope Sufferance, as well as teaching for a number of years, before setting up Frank in Whitstable, Kent—an independent space showing print and craft.

Mary Claire Smith has been selected for the Woolwich Contemporary Print Fair 2022.